BuskNY was proud to speak at Busker Ball 8, a showcase for the city’s most vibrant freelance performers, on Thursday. Under the direction of Theo Eastwind, the latest Busker Ball brought its focus to activism, criticizing the wrongful ejections, tickets, and arrests that have plagued the NYC subway performing community.

BuskNY spoke and displayed the banner we used for our rally at City Hall, and the audience also heard a recorded update on buskers’ rights from Nick Broad of the Busking Project.

Sunday is typically a slow day in the subway, but today I nonetheless ventured into my shark-infested concert hall, where a few audience members were already bobbing around my cove: 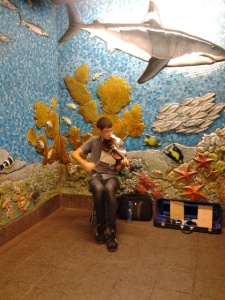 81st St is a great station on weekends, since it sees a steady stream of museum visitors headed back downtown in the afternoons. Plus, the B train only runs weekdays — meaning Saturday and Sunday offer extra-long lulls between the screeches of the MTA’s apparently never-maintained brakes.

I had hardly been there ten minutes before a guy came up, holding a violin case, and said he played fiddle. “Which kinds,” I asked. “All kinds!” Having thusly established our shared repertoire, he popped open his case, and we shared a pretty solid set of tunes. It turns out that my new pal, whose name is Douglas, acts, performs, and sings in New York, and has some experience working in the subway as well. You can check out his site here!

Although Douglas had to hurry off to a gig, I kept having a great time at 81st, playing some good tunes and explaining the absence of the B train to visitors from several of Europe’s finest countries.

After two hours, I was feeling pretty played-out and took off for home. By the 14th St transfer to the L, my mind was already more on finding sustenance than on music. But lo and behold: as I stepped of our train, I saw a violinist killing Bach’s fugue in G minor across the platform.

Having previously thought myself the owner of the subway G minor fugue market, I hurried over to check it out. Turns out it was none other than Filip Pogády, violinist extraodinaire, who I had met last summer after he watched me perform at 81st St.

He’s been very active with a burgeoning solo career, but is still finding time to perform underground as well. MTA riders have lots to complain about, but read this guy’s bio — low-quality violin concerts is one problem they don’t have!

Just a good reminder that, while Joshua Bell may only have played that one time, there’s a broad base of serious talent in the subway. So keep your ears peeled!