I’ve gotten out of the habit of posting busking updates — there aren’t enough hours in the day sometimes! But today saw a couple things that I can’t avoid sharing.

1. At Hunter College, one man bent over to put a dollar in my case while carrying a baby. The baby was carrying a bag of cheerios, and, in the spirit of charity, decided to pour ALL OF THEM INTO MY CASE. In other news, I still had a great day out — apparently busking while surrounded by cheerios doesn’t hurt your earnings too badly.

2. On the Union Square L platform, I ran into Larry and Sonia Wright drumming. (You should click that link by the way — the video will move anyone who’s seen him play). Just down the platform from them was a guy drawing portraits of riders. And right around him were Larry Wright’s sons, waiting to get on the train and dance.

Needless to say, I got my portrait done, there on the platform, surrounded by Larry Wright’s kids and by the sound of bucket drumming. It felt like home.

Today, Milo and I spent a few hours doing outreach. What I’m learning is that community organizing is a bit-by-bit process: every day brings a few new conversations, a few more names on the mailing list, and a few more t-shirts out in the world. That may sound romantic — but is it ever slow-going as well.

Still, we’re building something important. Today at 14th St, we saw a large green parrot on someone’s shoulder on the platform — and we also ran into Don the bucket drummer, playing a Kikkoman soy sauce bucket like the world was about to end: 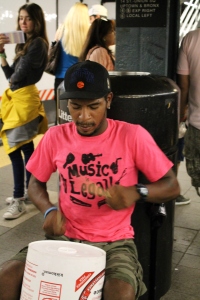 A couple hours later, we ran into a cellist who had already seen Don in his shirt. So, we know that word’s spreading!

I also busked for about an hour and a half, in two different stations, with Milo taking some pictures. I learned that I have an incredible ability to make weird faces while playing:

Would you tip a guy who looks like that?

Anyway, one more story from today. When we arrived at the 59th St 6 station, we saw a police officer across the platform. Like I mentioned in the last post, I’m feeling a bit tired of going to jail for music — but ever hopeful for the best, I unpacked and asked Milo to take video if she came over.

Indeed, she came by within five minutes and asked if I had a permit. “What permit?,” I asked. “Have you ever seen one?” “No,” she said, a bit sheepishly, “although you do see those banners.” I then showed her my rules, and after taking a careful look, she had this to say:

“Thanks for showing me this. Now I know.”

Now there’s a hopeful sign indeed. (If only — if only — but if ONLY the NYPD offered training on this!)