Update: Commissioner Bratton has responded to the public debate, suggesting that performers ‘find another spot.’ No word on whether Bratton is aware of on-going arrests of law-abiding performers on platforms and mezzanines.

In a new post at the Subway Diaries, Heidi Kole comments on the results of the crackdown:

” The performers have been moved on, arrested, ticketed & charged with the crime of self expression. It’s a very sad, bleak & lonely place underground since the new police chief, Bratton’s entrance. Every day now when I go under I get either questioned or ticketed or worse. […]

Thee is no music, no dance, no laughter, no art. There is only the loud rumble of metal on metal of screeching brakes interspersed with NYPD announcements over the loud speaker of what to be ‘afraid’ of.

Meanwhile, Bill de Blasio insists that there is no subway crackdown. According to the Observer, he claims that the spike in arrests is “the result of case-by-case decisions by local police commanders, not a larger shift in policy.” Never mind that those police commanders have no training on the MTA performance rules, and never mind their well-documented/counterfactual belief that performance is a crime. Particularly, says de Blasio, never mind that since January, far more untrained police have been in the MTA than ever before. Nope — there’s no crackdown to see here. 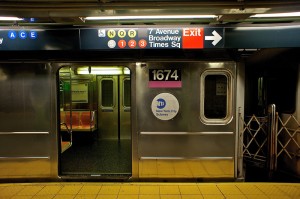